The mineral pyrite, or iron pyrite, also known as fool’s gold, is an iron sulfide with the chemical formula FeS2. Pyrite is considered the most common of the sulfide minerals.

Pyrite’s metallic luster and pale brass-yellow hue give it a superficial resemblance to gold, hence the well-known nickname of fool’s gold. The color has also led to the nicknames brass, brazzle, and Brazil, primarily used to refer to pyrite found in coal.

In ancient Roman times, this name was applied to several types of stone that would create sparks when struck against steel; Pliny the Elder described one of them as being brassy, almost certainly a reference to what we now call pyrite.

By Georgius Agricola’s time, c. 1550, the term had become a generic term for all of the sulfide minerals.

Pyrite is usually found associated with other sulfides or oxides in quartz veins, sedimentary rock, and metamorphic rock, as well as in coal beds and as a replacement mineral in fossils. Despite being nicknamed fool’s gold, pyrite is sometimes found in association with small quantities of gold. Gold and arsenic occur as a coupled substitution in the pyrite structure. In the Carlin–type gold deposits, arsenian pyrite contains up to 0.37% gold by weight. 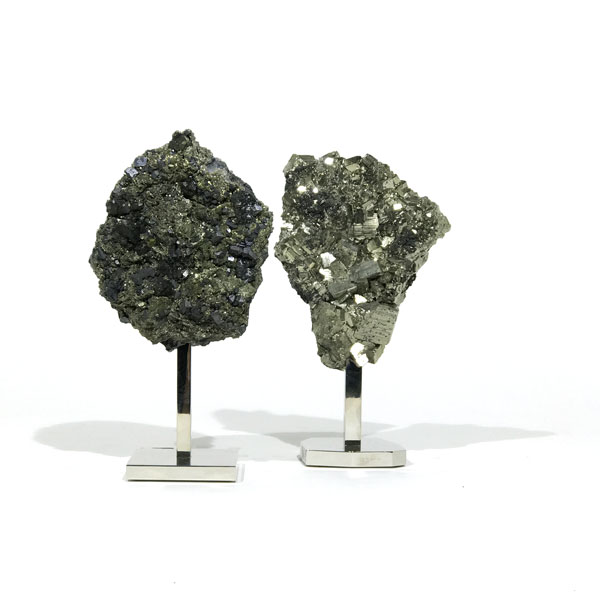 All products of our catalog are unique, so please contact us, using the form here below, for availability of our Pyrite products